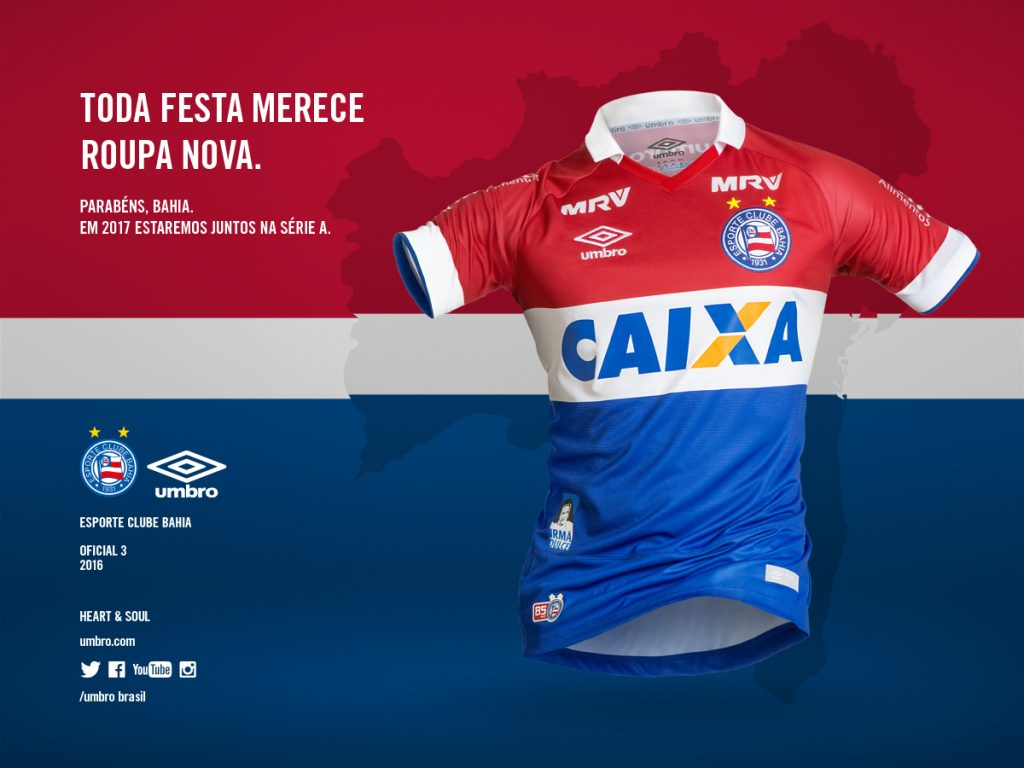 The last Saturday (26/11) has become another historical day for the 85 years of Esporte Clube Bahia team. The team has guaranteed its place in the A Series of Brasileirão 2017, in a match on the Olimpic Stadium, in Goiás, against Atlético Goianiense, and to celebrate, arrived in the capital with its new uniform number 3.

On the reception, fans expressed once more their devotion, and also had the chance to see the shirt developed by Umbro, inspired in the contemporaneous standards, polo type, contrasting and personalized cobregola, in addition to a raglan sleeve that has contrasting details on the top.

The big novelty of this release is the disposition of the colors, which makes us remember the Bahia State flag. The shirt has the superior part in red, a horizontal White strip in the middle and the inferior part in blue, as the sleeves, closing the celebrations of the 85 years of the club foundation. The fabric has a corrugated construction toe, to ease the sweat evaporation, also bringing a unique visual effect. The club’s crest in the chest is applied in looms and the Umbro Diamond is embroidered.

Since its announcement, in the first semester of this year, the partnership between the club and the sports material supplier delighted the demanding fans of the tricolor baiano, and now one beautiful uniform more. “We thought about every detail to honor Bahia and the good moment the team is having. We have the privilege of making part of the history of this giant of the national sport and we will go together through 2017”, comments Eduardo Dal Pogetto, manager of sports marketing of Umbro.

The shirts can be found at the stores from next Friday (02).